Rebellion is coming to Dubai!

As 2021 draws to a close, it is in the heart of the Middle East that lovers of beautiful mechanics and Rebellion will meet. During this exceptional period, which coincides with the fiftieth anniversary of the creation of the United Arab Emirates, Dubai will host two unmissable events: the Dubai Watch Week, from 24 to 28 November and the Historic Dubai Grand Prix Revival, from 1 to 3 December. In a magnificent setting, enthusiasts will be able to discover the uncompromising universe of Rebellion, a vibrant mix of high-performance mechanics and daring design.

Like the Middle East, the Arabian Peninsula responds to today’s challenges and shines through its attractiveness and willingness to innovate. Its architecture plays the card of impertinence and modernity, like the design of Rebellion watches. Its passionate, future-orientated population loves excellence and surpassing oneself. Rebellion shares these same values and meets their expectations during major sporting events with an international audience such as the Dakar Rally for which the brand has been a partner and official timekeeper for 3 years.

On the occasion of the fifth edition of the Dubai Watch Week, and for its first participation, Rebellion is proud to present four major creations, unveiled in preview during Watches & Wonders Geneva 2021.

A true concentrate of high technicality, the Re-Volt Chrono is available in six references, all of which have been created in accordance with the brand’s impertinent aesthetic codes. Two satin-finished titanium cases enhance their technical character. One of them stands out with its touches of energetic bright blue. Four lightweight and robust black DLC titanium cases are combined with coloured dials. Two are adorned with ultra-sporty shades. A dominant red or an intense orange variation enhances their sporty personality. The titanium version plays the card of versatility to better match all wrists. The golden finish and gold hands reinforce a resolutely sport-chic look.

The ergonomics of the Re-Volt Chrono are designed like the cockpit of a racing car for ease of use. Its open architecture therefore offers a striking view of a sculptural setting in relief. Every detail then expresses and embodies the brand’s passion for motorsport. The hour and minute hands covered with luminescent materials move on a honeycomb dial like the grille of a supercar. Times up to 60 minutes are measured using the two push buttons designed as accelerator and brake pedals. The results can be read on the totalizer housed at 3 o’clock in the form of a stylish tachometer. The sapphire crystal case-back allows you to observe the oscillating weight with lines identical to those of a wheel rim. 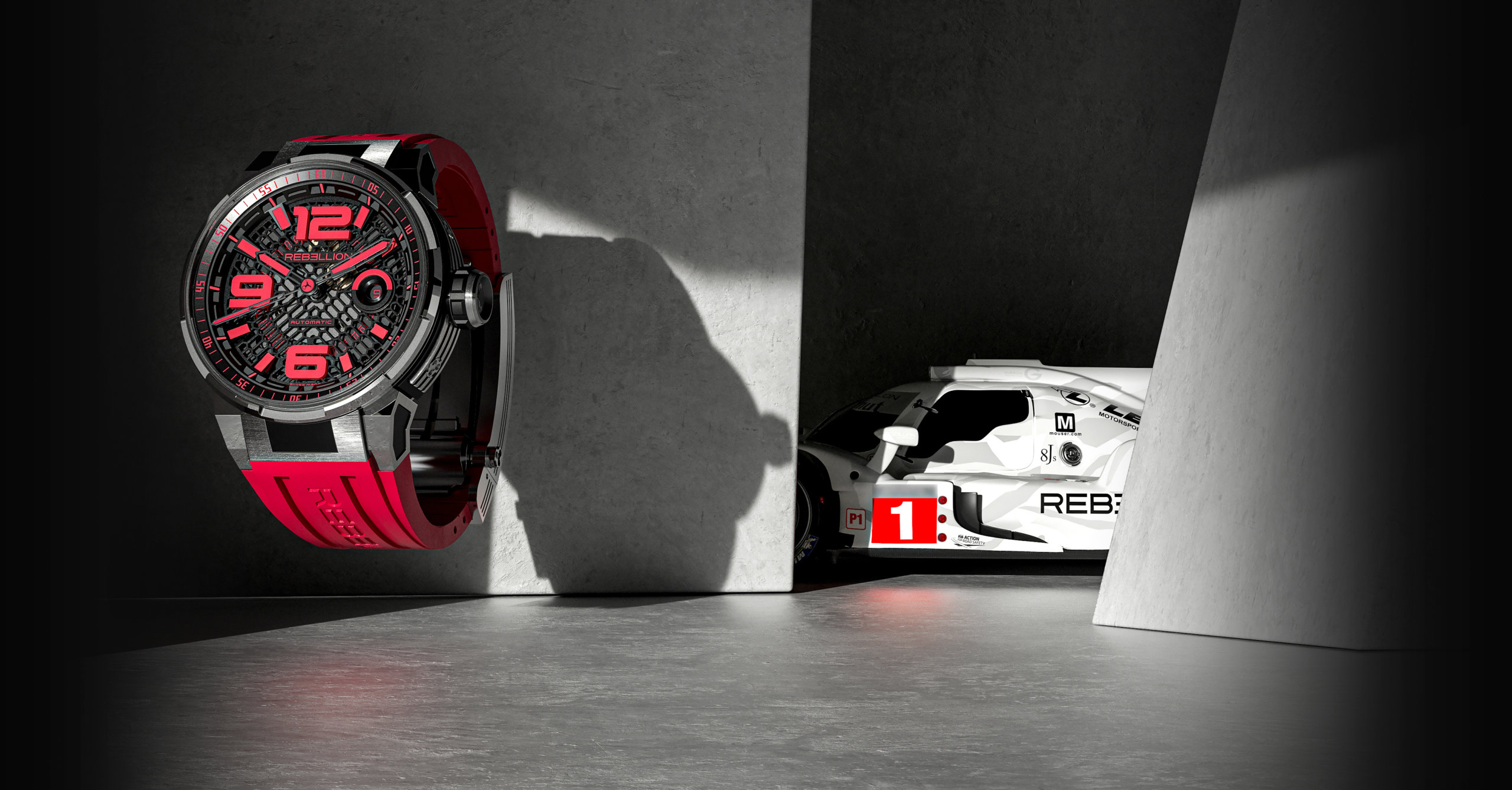 Shake things up with the Predator 2.0 3 Hands! Rebellion offers a major update to its iconic model. Its design, always inspired by the world of motor racing, is gaining strength. Like the Predator Apnea, the Predator 2.0 3 Hands features three-dimensional luminescent elements produced from machines unique in the world that create a spectacular scenography. On its honeycomb patterned dial, the luminescent material is omnipresent to ensure optimal readability in all light conditions. When elsewhere, it is about painting, here, the XXL size numerals and the date window are moulded to form blocks of tinted Super-Luminova®. The indexes and hands are covered with this luminescent material to offer a remarkable setting on the Predator 2.0 3H Titanium Blue and Predator 2.0 3H Titanium Red.

Rebellion is also introducing three other variations with uncompromising sport chic style. The Predator 2.0 3H Titanium White benefits from the same advantages as the coloured versions. Its high-purity white components ensure maximum readability. The Predator 2.0 3H Black DLC Titanium model stands out with its extreme design. Black reigns supreme so as not to go unnoticed. As for the Predator 2.0 3H Gold 5N, its appearance plays the card of aesthetic impertinence. Provocative by nature, the omnipresence of red gold exacerbates its elegant personality. All Predator 2.0 3 Hands have a robust and lightweight 48mm diameter grade 5 titanium case.

Sporty at heart, refined in essence, the Predator S Black Rainbow combines the best of the fighting spirit resulting from Rebellion’s experience in motor racing and the meticulous and delicate expertise of the art of jewellery. The Swiss brand’s watchmakers are breaking with the conventional way of thinking with uncompromising mechanical creation. This new ladies’ watch features a powerful design enhanced by the magic of precious stones.

All these watches with a strong aesthetic personality have one thing in common: all their time information is powered by a high-performance Swiss Made automatic calibre.

Last but not least, Dubai Watch Week will also be the opportunity to (re)discover the astonishing Weap-One Diamond Asymmetrical Flying Tourbillon with a synthetic diamond tourbillon cage obtained using an exclusive technical process! It took more than 360 days to finalise this exceptional piece.

Make Racing Cool Again! Forty years after the first Grand Prix race in Dubai, and to celebrate the 50th anniversary of the creation of the United Arab Emirates, Rebellion is proud to be a major partner of the Historic Dubai Grand Prix Revival, which will be held on 2 and 3 December 2021. This “historic” race will feature all the hallmarks of the 1981 event with F1 and Group C Grand Prix cars from the 70s and 80s, on the Dubai Autodrome circuit. In addition to the supercharged atmosphere of the competition, this event will give the opportunity for vintage and classic car enthusiasts to relive an era.

Rebellion will meet there with the GP Extreme group, with which it is a partner of its GPX Racing entity during the GT World Challenge Europe endurance championship. When GPX Events, the organisational entity of the group, requested the presence of Rebellion by its side for the Gulf Historic adventure, Rebellion did not hesitate for a second! On the bill: beautiful mechanics, adrenaline and fun, in a very 70’s-90’s warm atmosphere… a 100% rebellious programme!

Rebellion will be delighted to be as close as possible to the competition once again and to present the winners of the Formula 1 (1970-1985 cars) and Group C (1982-1992 cars) races with their trophies.

Rebellion will also make its presence felt at the Grand Prix with an exclusive sporty chic limited edition. The Twenty-One Gulf Historic watch features the elegant cushion-shaped case and the set-up inspired by the design of the steering wheels of the iconic classic cars of the original model. This variation adopts vintage look combining the black of the case with timeless lines with elements in warm and copper tones. In this refined setting, the time is displayed at 12 o’clock using a rotating disc like the counter on the sculptural American Pony Cars. The minutes are pointed by an imposing red hand like that of a supercharged tachometer. This data is orchestrated by a precise Swiss Made automatic calibre. And to reinforce its vintage style, the timepiece comes with a comfortable nubuck leather strap stamped with the event logo.

“It is an honour for Rebellion Timepieces to be involved as GPX’s main and strategic partner for the Gulf Historic, we have already shared some memorable moments with them during the GT World Challenge and look forward to continuing the partnership with such a high profile event. The Middle East is full of car enthusiasts who share our vision of motorsport and together we will make this event a great celebration. Furthermore, the timing is perfect; it is an exceptional opportunity to roll out this organisation at the same time as the World Expo, the UAE’s anniversary and 40 years after the first Dubai Grand Prix. We can’t wait to be part of the adventure!”, comments Calim Bouhadra, CEO of Rebellion.