HISTORY IS BACK ON TRACK!

Forty years after the first Grand Prix race in Dubai, and to celebrate the 50th anniversary of the creation of the United Arab Emirates, Rebellion is proud to be a major partner of the Historic Dubai Grand Prix Revival, which will be held on 2 and 3 December 2021. This “historic” race will feature all the hallmarks of the 1981 event with F1 and Group C Grand Prix cars from the 70s and 80s, on the Dubai Autodrome circuit. In addition to the supercharged atmosphere of the competition, this event will give the opportunity for vintage and classic car enthusiasts to relive an era. Rebellion will meet there with the GP Extreme group, with which it is a partner of its GPX Racing entity during the GT World Challenge Europe endurance championship. When GPX Events, the organisational entity of the group, requested the presence of Rebellion by its side for the Gulf Historic adventure, Rebellion did not hesitate for a second! On the bill: beautiful mechanics, adrenaline and fun, in a very 70’s-90’s warm atmosphere… a 100% rebellious programme! Rebellion will be delighted to be as close as possible to the competition once again and to present the winners of the Formula 1 (1970-1985 cars) and Group C (1982-1992 cars) races with their trophies.

“It is an honour for Rebellion Timepieces to be involved as GPX’s main and strategic partner for the Gulf Historic, we have already shared some memorable moments with them during the GT World Challenge and look forward to continuing the partnership with such a high profile event. The Middle East is full of car enthusiasts who share our vision of motorsport and together we will make this event a great celebration. Furthermore, the timing is perfect; it is an exceptional opportunity to roll out this organisation at the same time as the World Expo, the UAE’s anniversary and 40 years after the first Dubai Grand Prix. We can’t wait to be part of the adventure!” 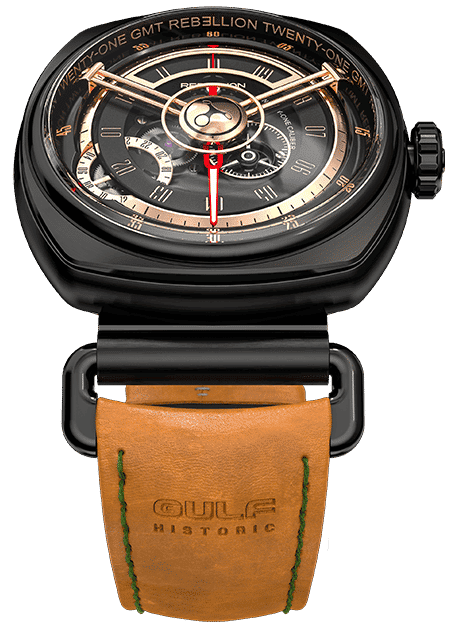 “We are extremely happy and proud to continue with Rebellion Timepieces the exciting adventure we started earlier this year in the framework of the international Grand Touring races. We have already shared the emotion of GPX Racing’s victory in the 1000 km of the Paul Ricard circuit, but from the start the idea was to forge a global partnership between our two groups. Continuing together on the organisation of Gulf Historic was therefore an obvious choice. Such an event, which will be both a competition and a great celebration of classic cars, fits well with our respective identities. And I’m sure we’ll have more opportunities to collaborate again in the future.” 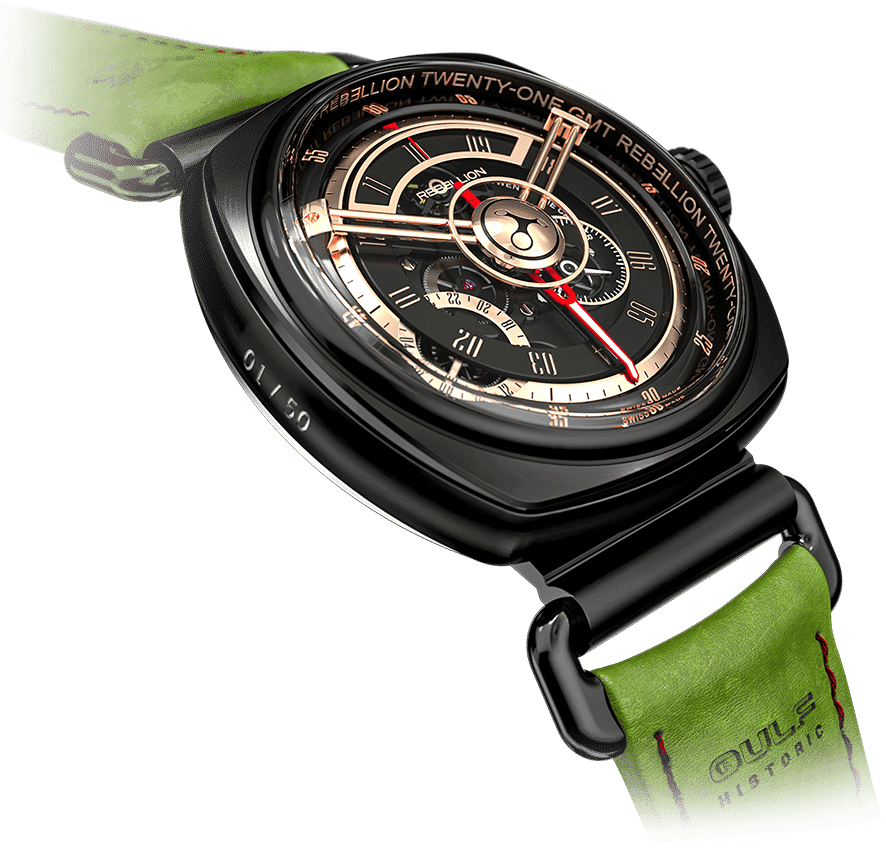 Rebellion will also make its presence felt at the Grand Prix with an exclusive sporty chic limited edition. The Twenty-One Gulf Historic watch features the elegant cushion-shaped case and the set-up inspired by the design of the steering wheels of the iconic classic cars of the original model. This variation adopts vintage look combining the black of the case with timeless lines with elements in warm and copper tones. In this refined setting, the time is displayed at 12 o’clock using a rotating disc like the counter on the sculptural American Pony Cars. The minutes are pointed by an imposing red hand like that of a supercharged tachometer. This data is orchestrated by a precise Swiss Made automatic calibre. And to reinforce its vintage style, the timepiece comes with a comfortable nubuck leather strap stamped with the event logo.