The Broadmoor Pikes Peak International Hill Climb (PPIHC), brought to you by Gran Turismo, one of the most dangerous hill climb races in the world, an extremely tight time trial.

RACE TO THE CLOUDS

REBELLION Timepiece becomes the official timekeeper for the spectacular 2021 Pikes Peak International Climb Hill. This legendary and spectacular rally-raid remains the third oldest official car race in the United States. At the end of June, nearly 130 adventurers of renown and amateurs will test themselves driving cars, motorcycles, quads and trucks.

The Broadmoor Pikes Peak International Hill Climb (PPIHC), brought to you by Gran Turismo, also known as The Race to the Clouds, is an invitational automobile hill climb to the summit of Pikes Peak – America’s Mountain in Colorado, USA held on the last Sunday of August. Founded in 1916 by Spencer Penrose (also the founder of The Broadmoor Hotel, Pikes Peak Highway and El Pomar Foundation), The Broadmoor PPIHC takes place on a 12.42 mile (19.99 km) public toll-road boasting 156 turns, while competitors climb 4,720 ft. (1,440 m.) from the 9,390 ft. (2,862 m.) Start Line at Mile 7 marker on the Pikes Peak Highway to the 14,115 ft. (4,300 m) Finish Line at the mountain’s summit. As the drivers climb toward the summit, the thin air slows reflexes and saps competitor’s mental and muscle strength in addition to robbing internal combustion engines of up to 30% of the power they are capable of at the Start Line. Competitors and vehicles must be in top shape and condition simply to finish, let alone win. The race is self-sanctioned and is the most diverse one day motorsports event in the world. 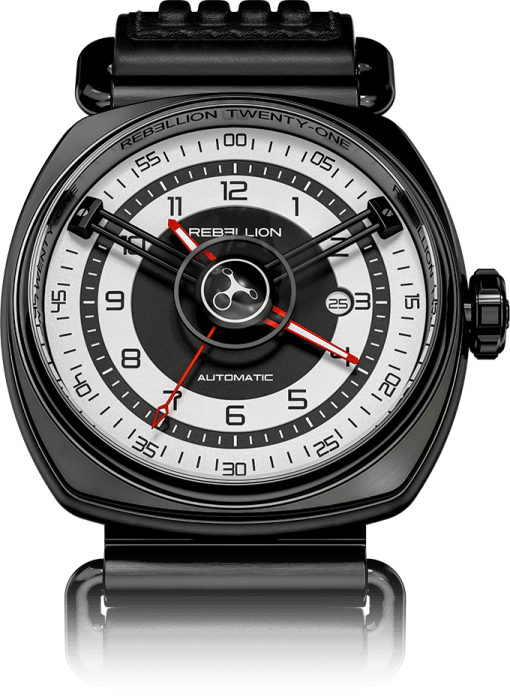 REBELLION Timepieces, delighted with the legendary and spectacular rally-raid, The Broadmoor Pikes Peak International Hill Climb (PPIHC), brought to you by Gran Turismo partnership, has unveiled a Twenty-One Three Hands Pikes Peak. Rebellion fascinates both with its powerful mechanical DNA and the diversity of its designs, strongly inspired by racing cars, especially through this new generation of Twenty-One that beats to the rhythm of an automatic movement. This timepiece has a date at 3 o’clock and three hands (hours, minutes, seconds). Its swiss-made movement is complemented by a unique REBELLION finish and a timeless cushion case. With its 38-hour power reserve, it’s the perfect blend of this “race to the clouds” style, and highend watchmaking and high-tech processes. Inspired by steering wheels of the most iconic classic cars and fabricated with the latest technology in the watchmaking world, the Twenty-One is a stunning modern take on classic style.